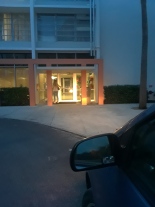 I suppose I could dump a whole load of “remember this stuff” on you.
I suppose I could say how fast it seems like time’s gone.
Or I guess I could go on for a while about the future and the possibility it holds.
But I’m not gonna to do any of that.
Not because I don’t want to. Or can’t.
But because I already have.

See by the time you read this, Little One, I’ll be on a flight headed back to Baltimore.
In an aisle seat, of course.
(next to a middle one, that’s just big enough for a car seat)
Thinking about you.
For about as long as it takes to go 1,114 miles.

And if people on the flight look at me, they’ll probably think my head’s moving to my music.
But they’ll be incorrect.
It’ll be a nod. A “yes”.
A silent sign to myself that an eighteen-year battle between what I know and what I feel is over.
My mind’s been shouting it. And my heart now accepts it.

My business card still says “Dad” on it, but right beneath it, a new word. “Advisor.”
Seems kinda weird. But right.

I realize that you’ve known for a while something that I either didn’t know or didn’t want to believe.
You don’ t need me as much.
Again, feels strange. But very right.

It’s all good because you’re ready.

Preparation, groundwork, foundation. That’s what we’ve spent a couple decades working on.
Life. That’s what you now get to design.

What’s happened in the past always influences what happens in the future. That’s what makes being a parent so challenging, exciting, and monumental, and, as we watch you take off, such a joy.
Our input, your unique application, and God’s direction – that’s gonna be a pretty cool thing to watch.

As you ease into responsibility, I’m cheering for you.
As you shoulder the weight of decisions, I’m ready to help whenever you need it.
And as you navigate your new independence, I’m praying for you.

I love you more than you could ever imagine.
Go get it, Ally.

It’s your turn.
You’ve got this.

1 thought on “Your Turn”