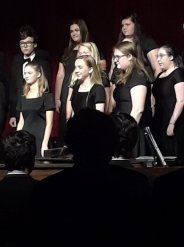 Third from the right.
Her Choral concert. The last one.

And all I could think about was the first one.
Same row – front, she gets that from her dad – with a bunch of other preschoolers.
That blue and white shirt and that red skirt.
And tons of parents.
We arrived early, clapped loudly, and smiled often.
(and got pictures using something called a camera)

And then, life happened.

And the undeniable realization that somewhere between Elementary Ed and Driver’s Ed, a little girl became a young woman.

Rewind is the urge. Pause is the preference. Fast-forward is the reality.

We can’t stop it.
The music just plays on.

1 thought on “Third From the Right”